Full Guide to Convert WMV to MP4 on Mac/Windows

Windows Media Video (WMV) is a format supposed to have a small file size due to high-quality playback. Furthermore, it comes in different sub-versions that can't help you out playing, especially on Mac computers. Therefore, people usually go for the search term on how to convert WMV to MP4 online. MP4 is a highly compatible video format that can play on almost every device. Most users aren't able to differentiate between MP4 and WMV formats even though both the video formats are highly popular.

Despite the smaller file size, the WMV format is not compatible with most of the devices. Plus, the WMV formats have associated DRMs responsible for delayed video transmission and restoring the licensing information on files. Some reasons to convert WMV to MP4. Without further ado, let's begin with the features of the Aicoosoft video converter.

Want to convert WMV to MP4 is the fastest and reliable way possible? Then, Aicoosoft would be your first choice due to some positive and competitive aspects over other tools. First of all, Aicoosoft supports more than 1000 formats, almost impossible with other free and online software available. It is because managing such a large format base can’t be done without professional management. With Aicoosoft, you have an advanced R&D interference that can easily convert even 4K/HD videos without losing an inch of original quality.

How to convert WMV to MP4 with Aicoosoft?

The software Aicoosoft is compatible with both Windows and Mac computers. Thus, you can use it to convert WMV to MP4 Mac as well. Let’s consider the exact steps to do so!

Start by installing the Aicoosoft software on Mac or Windows computer system. Then, you need to upload the WMV file for conversion by hitting the Add Files button.

Now, you need to hit the Convert tab on its main interface, as shown below.

On the same interface, upload the WMV format file. The next step is to choose the output format, which must be MP4 here.

That’s all you need to do! Such a simple interface with easy steps along with reliability is almost impossible to find in other tools. Given below are two different free tools to convert WMV to MP4; after studying those, you will know the importance of professionalism and reliability.

Movavi is a video editor that can be used as a converter as well. However, it's not a whole free app. You have to pay if you want extra and advanced features. It has a free trial version of 7 days to give you the feel of the whole app. In our opinion, it is more concerned with video editing than video conversion. If you want to convert WMV to MP4 via Movavi, it may not suit you in speed and dedication. Movavi is also not supportive of importing or uploading videos from specific devices. Thus, it has minimal features than Aicoosoft. Even though the tool consists of extra features, including screen recording, video conversion, etc., they are not worth it.

Recently, Movavi is in limelight due to disappointment in its 'Record Screencast' feature. You also get this essential feature when you purchase their expensive Video Suite. So, that's a bit harsh side on the terms of Movavi, we think.

How to convert WMV to MP4 via Movavi Video Converter?

Let’s see the steps required to convert WMV to MP4 online with Movavi as follows.

Steps to convert WMV to MP4 with Movavi.

The first step is to download Movavi Video Converter on your Mac or Windows operating system. Well, you will get pretty simple instructions on their site on how to install it. 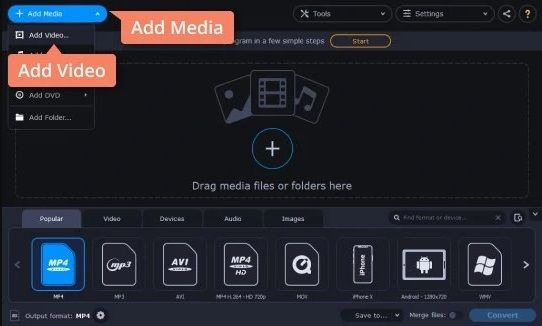 Before you move to select the output format as MP4, a list of steps comes in between editing and compressing your optional files. Overlooking those steps will get you to choose MP4 as output format.

At last, hit the Convert and Save to button to proceed. 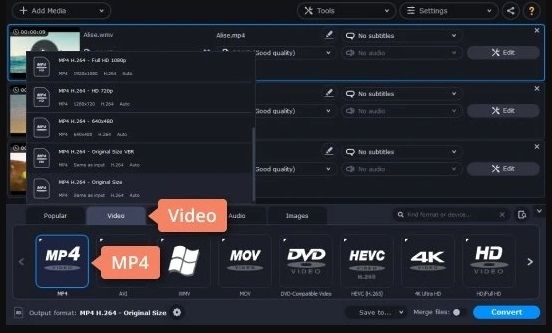 The Convertfiles is another online and free to convert WMV to MP4 with worthy yet less effective features than Aicoosoft. Well, we'll let you the reason for sure. As the name suggests, the tool is, however, dedicated to file conversion. The device comes with File Converter Categories, including Document Converter, Archive Converter, Image Converter, E-Book Converter, Presentation Converter, and Video Converter, etc. It's a great tool if you are looking for speedy document conversion. Other than that, its other conversion aspects fulfill but after taking a certain extent of more extended time.

How to convert WMV to MP4 with Convertfiles?

Given below are steps you are required to follow to convert WMV to MP4via Convertfiles.

Go to https://www.convertfiles.com/ and hit the Browse button beside the Choose a local file tab.

Step2Select the input format as WMV

Step3Select the output format as MP4

After you select the output format, hit the Convert button. You can also tick the box Send adownload link to my email.

So, these were the few ways on how to convert WMV to MP4 online for free. All in all, we have discussed three methods, including Aicoosoft, Movavi, and Convertfiles. The Convertfiles is a bit unprofessional software with limited features such as lack of format support, efficiency, etc. On the other hand, Movavi is professional software more bent towards video editing than video conversion. Thus, the better option left is the evergreen Aicoosoft, which consists of highly skilled characteristics, including 30X more speed, a significant amount of format support, etc.